Upgrade to Ubuntu 18 will not boot

I am really hoping FOSS can help me solve an upgrade problem’
Have tried upgrading to Ubuntu 18 multiple times but it wont boot after installing.
So then I have to reinstall Ubuntu 16 which works fine on this computer.
Also have Windows 10 installed which also functions normally.
I have tried upgrading directly from Ubuntu 16 and I have also purchased a new
distribution of Ubuntu 18. Neither will boot up after install.

Is there something different about Ubuntu 18 that would prevent it from working
even though Ubuntu 16 works great?

I have also purchased a new
distribution of Ubuntu 18

You mean you purchased the disc where the free distribution is on, right?

I purchased and then downloaded the version 18.

What do you mean by “purchased”?

This will inform us about your computers specifications.

Copy and paste your inxi -Fxz print out in the reply box, then look for this </> symbol, it formats and preserves the print out integrity.

i have seen that before, but also think it would be helpful to check out if the site they got it from was above board. @Jimany, do you mind sharing a link to the site you ordered from? not to second-guess or judge. just to make sure it passes muster with a different set of eyes. sales or distribution of knock-off distros with malware added has happened in the past.

If you got from this site, you are fine. Personally I would not pay until I was satisfied it works. 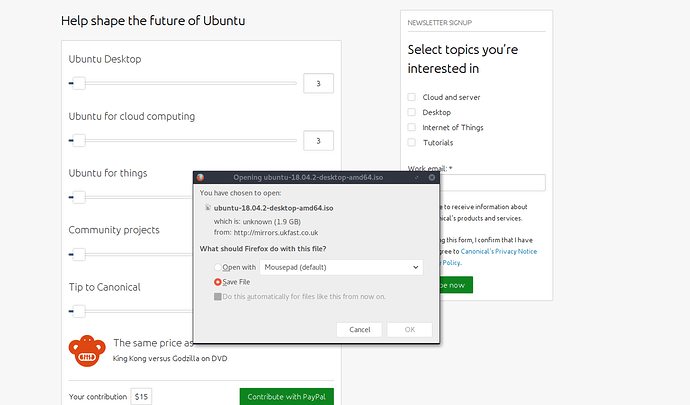 Hi cordx, can you format Jimany inxi -Fxz print out

@Jimany until I saw this with the image @anon56357095 had posted I never would have looked down there to see the donation. I personally have never made a donation from here. I don’t think it is something you have to do as it your choice to do so or not, so don’t think you have to do so.

He made a donation to Ubuntu, thinking he had purchased the download.

@anon56357095 that is what I thought he was saying. It is not clear on the site at all that it is only a suggested donation

@Jimany I already formatted your text correctly, no need to edit it further.

thank you for helping clear that up. i didn’t mean to derail the discussion or question your judgement. i just wanted to make sure we were starting out with a clean copy

Read this post by @abhishek Updating in an old computer?

It may be worth your while, before upgrading your computers hardware to try a lightweight distro such as Linuxmint Xfce: https://linuxmint.com/download.php to see if this resolves your boot up issue.

Reference how to enable Nvidia driver:

I usually have better luck by formatting the drive before doing a fresh install. Free remote storage–Google Drive, Dropbox, MEGA–makes it easy to safeguard my data and then restore it. Actually, I’ve stopped storing any of my data on my computer permanently; it all goes to remote storage.

Pay for Ubuntu? All distributions seem to be free, once you bypass the donation notice.

Usually, Windows first, then Ubuntu. That way GRUB works properly. With the prices these days, install another HD–a 250G SSD would be sweet for your Ubuntu drive. Use the Windows HD for GRUB. I just bought (tax refund!) a Windows 10 gaming machine, so I use it as a console for games only and do all of my real work on my Linux desktop. They’re connected by a KVM box to simplify the mess. It’s the step beyond dual booting.

No all you need is a product key. You can run Windows without one for awhile without it, but you will keep getting nagged about it. This you can ignore if you are switching to Linux anyway as you main system