What Is Your favorite Open Source App?

What is your favorite Open Source Application and Does it run on Linux, Windows, or Mac or some or all three?

Mine is Deluge when I use it with VPN. Only on Linux.

Sayonara media player… it’s the duck’s nuts… far as I know it only runs on Linux… I guess maybe I should try see if it runs on FreeBSD, but haven’t turned on my FreeBSD NUC for months…

But I still use it - all day, every day, at work… and thanks again to @Abishek for recommending it months/years back on It’s Foss facebook group… It’s also great at managing tags, when I’m too lazy to script/cli using id3v2 (which isn’t capable of doing metadata on FLAC files anyway)…

Honourable mention shout out to :

For me it’s always the one that I’m using at the moment, I cannot name only one as my favorite. Right now Firefox, as I type this reply.
Caprine, whenever my wife wants to reach me via messenger… Oh, there’s Thunderbird, which is my PIM, much more than just an e-mail client…
Libreoffice Impress along with “Export as images” extension when I need to turn a presentation into series of pictures. Or if it contains animations, fancy transients, I just play the “slideshow” and record it with OBS.
I try not to forget GIMP, which is my preferred image editor.
VLC if I look into a video…
Seafile client maintains my many data folders in sync with my server -thus between my gadgets-, which is the community version, so opensource.
Audacious plays my favorite online radio in the background.
As I still need to produce huge amounts of optical discs, I could not live without cdrskin, as this the only one, that allows me to burn on multiple burners at the same time.
Fontforge is my life-saver, when I’m pushed to use some specific fancy font, which lacks accentuated characters of my language…
All of them are my favorites…

Make a lyer of me would ya? Dang!

Sayonara just crashed my Gnome session, I recovered it sorta, but everytime I tried to do anything in Sayonara (e.g. skip forward, or skip track) it would suddenly chew up 120% of my CPU! Doh! Had to remote into my desktop machine from a Windows 10 machine and issue “sudo reboot”

if that ain’t ironic… 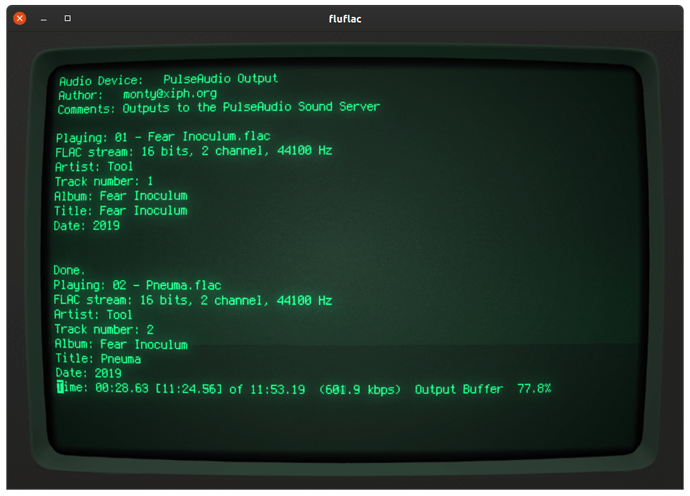 Now’s I just need something that’s like ogg123 or mpeg123, but a bit friendlier, and less “crashy” than Sayonara… which I think I’ll stop using till it’s fixed…

@daniel.m.tripp
Try Audacious before. It doesn’t look that fancy, but it’s really 100% functional.

Thanks for the suggestion mate, just tried it out, and I kinda hate it (audacious)…

I already sort all my music by artist, and album, in folders… I don’t need something else to come along and decide how to organise, what I already meticulously organise in minute detail, using a simple “b tree” database (i.e. UNIX filesystem with files and folders)…

Audacious comes along and presents it by genre! That mp3 tag annoys me so much - for a start there’s like 50,000,000 sub-genres of metal alone! e.g. Scandinavian Melodic Black Metal (which has Norwegian and Swedish sub-genres itself!), vs Scandinavian Grindcore Black Metal - I sometimes, when I’m tagging, and get prompted for genre, I make it “accapella” whether it’s Shostakovich or Burzum, because the whole idea of “genre” annoys me so much! I already know that Mozart is Baroque, Tool is progressive metal, and Pink Floyd is progressive rock…

@daniel.m.tripp
I don’t like that either. Just let sort the playlist on the thing you want it to. I do let sort the list on track

Forgot to mention tmux and zsh (not necessarily in that order)…

And in zsh I use “oh my zsh” (and customise it - because I’m colourblind and I can’t see/read red text on a black terminal background), and in tmux I just started using “oh my tmux” today. 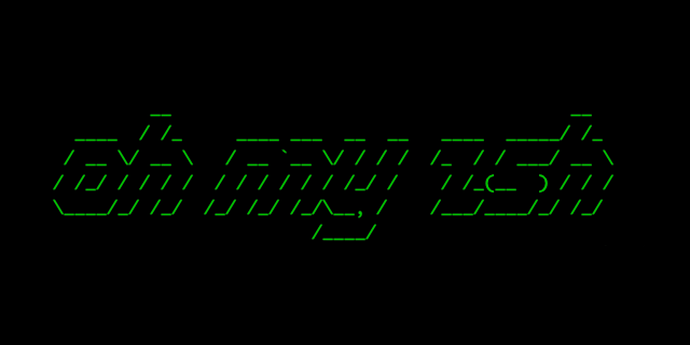 (red is the colour this zsh theme uses if it realises you’re in a remote SSH session - and I do about 90% of my “stuff” in a ssh session, remotely - and I NEED to know at a glance what host I’m working on!)…

One thing I love about oh-my-tmux? You can toggle mouse mode with “ctrl +b +m”, I figured out how to do that a while ago, but could only get it to work with “ctrl +b +M” to turn it on, and “ctrl +b +m” to turn it off - and it wouldn’t work in remote tmux sessions - but it works now! It needs to be an easy toggle option, because in mouse mode, copy+paste (e.g. select to copy, and middle-button to paste) doesn’t work the “UNIX way”

My favorite open source app would be signal: Signal is a secure open-source messaging app for smartphones. It also offers a standalone desktop app for Linux, Windows, and macOS.

Of course, it’s tough to choose one while I’m using several others (which are also useful to me).

It’s actually funny how many open source apps there are that a lot of people use and people don’t even make up their mind about it being open source. Sometimes they don’t even notice.
This applies to browsers and other tools.
But if you’re really strictly looking at who is using such software, basically every Internet user, uses FOSS to some degree. There is OpenSSL, Linux, other components I don’t remember the names of, etc.

So the point for me is that I use a lot of great F(L)OSS, so that I cannot really decide what is “best” or “my favourite” . It depends on the area.

Home from work - stinker today must have hit 40 celsius, and it’s still over 30 at 19:30 - having a few coldies (chilled white wines) and spotted this meme about metal 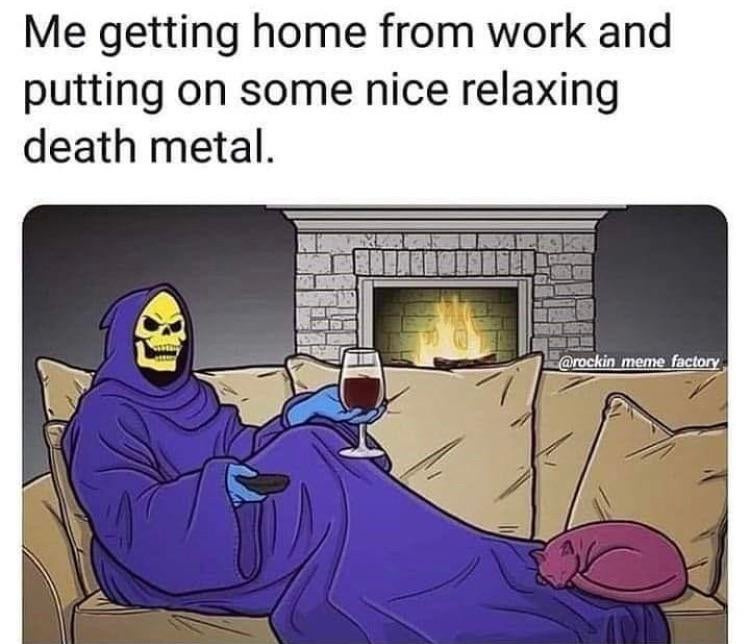 Truth be known, I prefer black metal, to death metal, but most folks wouldn’t know the difference between Metallica and Watain

maybe we can have a separate thread for “meme collection”

? That would be a treasure xD

I kinda thought spicing up any thread with some dank, or even spicy, memes would perk the place up a bit - seriously, I actually once worked as an undertaker*, and sometimes this forum seems as dead as a mortuary snikket-im has 3 repositories available. Follow their code on GitHub.

I just found this new IM. I like P2P networks in general, but there are some areas that I just don’t find useful if based on P2P technology. Therefore I’m happy this new IM is actually based on a centralised server approach.

I found this IM by checking out new apps on F-Droid.

The description says, that the Android client is based on XMPP’s most popular client, so I was not sure if the server is just another fork of XMPP based servers. However, the server seems to be created from scratch, so maybe it is indeed something new, which would be preferable, of course.

Mine is LibreOffice, runs on Linux, Windows and Mac. Also Firefox, Thunderbird, VLC Mediaplayer and TeamViewer… Thanks to Akito I am able to correct this message because TeamViewer is NOT open source!

Would be too nice if TeamViewer were open source.

I’ve been using Sayonara for quite a while now, and IMHO, it’s got all the others I’ve used over the years, beat.

Apart from Firefox,VLC and Libra Office suit, I use KSnapshot a lot for cropping pictures and grabbing sections of screen. I find it easier than a more featured program for simple stuff (GIMP has a pretty steep learning curve
)It’s particularly useful when trying to explain something remotely as you can send ‘big picture’ plus an enlarged section as a detail view. I’ve even taken a pic’s of a quick sketch, took 20 seconds instead of drawing out in CAD

Agreed… Decided to kick the tyres on 1.4.1 (Sayonara) again - seems more stable than 1.3.x… Originally ent back to 1.3.x when I had problems with 1.5.1, which is “buggy” and hasn’t been updated, can’t remember my reasoning for eschewing 1.4 in favour of 1.3… I think Sayonara is the one app that I cannot live without

… just wish Lucio would update it…