Before I got and installed Ubuntu on my PC, I had read that the vi editor was in most all versions of Linux. If true, how do I find it?

vi is a terminal-only editor. you can launch it in a terminal just by typing in the command vi.

edit: a note of warning, there are no in-editor guides to show you how to save a file or close the editor. for example, to close the editor you have to make sure you are not in insert mode by pressing esc and then type :q to get it to close. if you have made changes, you may want to save those with :wq (write and then quit).

The GUI version of vi/vim is call “gvim”… Search for it in the Software Centre or whatever it was called in Ubuntu 14.04 (which is now end of life I believe).

In Ubuntu 20.04 the package is “vim-gtk3” - i.e. install it with “sudo apt install vim-gtk3” (there’s another meta-package that contains it too: “vim-athena” I think).

Thanks Dan. I’ve found and grabbed vim for Windows and played around with it. I didn’t get very far. I used vi decades ago when I learned computers on a Unix system. I guess I’ve forgotten most of the usage and will have to relearn it.

What I don’t yet know is what and were is the “terminal” to launch vi in my Ubuntu, but I’ll look around for it.

in most versions of ubuntu if you press crtl + alt + T (hold down the ctrl key, press the alt key at the same time and hold it down as well then press the T key) a terminal will open for you.

out of curiosity, is this the system you recently installed ubuntu 18.04 on or is it actually running 14.04?

Thanks for the terminal info.

how are you enjoying ubuntu so far?

I like it, but there is so much to learn and relearn from my days decades ago on Unix system 3.

The boot up is really fast and puts windows 10 to shame.

I have an 18gig file I want to tryout with the word processing software that is in WordPerfect now. I have 3 more files to put in there and then convert to something the wp in Ubuntu so it can read and further edit.

I really wish I could have both systems open at the same time s I don’t have to shut down and reboot, especially going back to windows 10.

Wow! Am I reading that correctly? Is that supposed to be 18 GB of files, surely not one single file that big? I mean it wasn’t till MS-DOS 4.0 that you could have partitions bigger than 32 MB (never mind GB)… And it wasn’t till like Fat32 that you could have partitions of multiple GB in size, and I’m pretty sure there was a 2 GB file size limit in most 32 bit operating systems (e.g. even Solaris UNIX 32 bit)…

You should be able to find tools in OSS that let you convert old file formats (like *.WPS files)… I don’t know if Libre Office can do that already or not…

I’ve never used WordPerfect, and I’m not exactly “young” - I’ve used IBM Displaywrite 3 and 4 (I got quite good at it too - and I’ve still got a few archives with DW4 documents “*.doc”), WordStar (there’s an OSS compatible “terminal” app called “WordTsar”), and MS Word for MS DOS 5 and 6…

When I was doing desktop support (i.e. jack of all trades, Networking/Netware/Windows/Email and UNIX + mainframe + desktop support) in the early/mid 1990’s I’d occasionally run across a PC running Wordperfect - all it was, was a blank blue screen (kinda like a windows BSOD - but without any writing) - I had no idea what to do - so I’d just power cycle it if I needed to work on it

Yep, you read it correctly, it’s 18 gig on my 2 Tet expansion hard disk and it the news site where I wrote comments and opinions will ever get off the soft chair and copy and send me my 3 years worth of writing, it’s going to get much bigger.

Then I plan to search it for all occurrences of key words to put into separate, dedicated files covering just that one key word subject. I’m thinking about putting the files into an HTML menu driven research tool of history, politics and other subjects on either a Facebook page I have or some other place like a web page.

CHUCKLE, “I’m not exactly “young” either, more like old. In my DOS days it was, I think, Wordstar and DBase and some spreadsheet I don’t remember. Then we got a SuperMini computer and it was Unix from Bell Labs with some Berkeley additions where I learned vi + ed.

When I transferred to a different agency it was WordPerfect, but I also had an IBM PC with 2 hard disks running IBM unix! There were other writers programs on the IBM main frame, but I didn’t use them much.

I taught myself HTML and used Multiedit to create an Intranet for a bunch of scientists on medical science issues and reports. I did my share of desktop support for the medical science people, mostly saving them from themselves when they messed up their writing their documents and reports.

When I retired I got into reading news articles on various news web sites and writing comments on them which led to this 18gig file.

WordPerfect, so far, has handled my stuff without and problems. I joined it user community and finally learned to use some of their Macros to do stuff on the file.

Then I plan to search it for all occurrences of key words to put into separate, dedicated files covering just that one key word subject. I’m thinking about putting the files into an HTML menu driven research tool of history, politics and other subjects on either a Facebook page I have or some other place like a web page.

this description reminded me of a personal wiki. obviously you will and should create your site with whatever means you are comfortable since you already know html. i just thought i would mention the wiki idea since it sounded similar and read about (but have not used) a program called Zim which can possibly help organize that and maybe even provide some html to be used in a site if that is the end goal.

Zim is an impressive cross-platform, open source note taking app for users who want a wiki-style collection of their notes, tasks, or ideas.

Create a wiki on your Linux desktop with Zim

There's no denying the usefulness of a wiki, even to a non-geek. You can do so much with one—write notes and drafts, collaborate on projects, build complete websites. And so much more.

How to Create Your Own Wiki Site - Make Tech Easier

If you’d like to actively capture and build knowledge, whether for your personal wiki or an organizational one, this shows how to create your own wiki site.

Thank you for that information. I just got through reading it’s description on it’s web page. As soon as I get Linux fired up I be looking for it. This will be a wonderful tool. This is like that Ford auto commercial back in the 1950’s, I think, that has a light bulb go off over a guys head. I use Wiki all the time when I’m writing something that needs the Omph! of a bit of history, background, people, and specially laws.

This is really a neat idea, thanks again.

I found the windows version of ZIM. My Ubuntu did not have anything in the software list so I went outside and found the ZIM web pages. Those pages led to a long list of files for download, but didn’t identify which to choose for a Ubuntu system. Very confusing.

I found a version for Windows 10 and downloaded it and now have it all set up. It looks really nice, but I’m going to have to spend some time with it. It should be fun.

Thanks again for telling me about it. If you have any more suggestions let me know.

ubuntu has a package for zim that you can install from a terminal if you want to try that. you can open a terminal with ctrl + alt + T (as discussed when trying to find vi). this first command would update your package list:
sudo apt update
this second command would install zim:
sudo apt install zim

my name is cord by the way

Sorry cord, I blew that one.

I appreciate that info to get ZIM for my Ubuntu. I’ll grab that version today.

I ran into a problem getting zim per your instruction. When I did the second command, I got this error message: install: missing destination file operand after ‘zim’
followed by this:
try ‘install --help’ for more information
which showed this at the top of the display:

(I didn’t get a copy of the information even though I did hi-light it, then hit to copy ctrl c & ctrl v to past didn’t work)

the jist was that I should be using one of two named packages, either yum-1 or apt-get 1

i appreciate you trying to copy and paste the information. it can be hard to figure out what went wrong without the exact terminal output. without being able to see that, i don’t know what “missing destination file operand after ‘zim’” would refer to.

when i was first getting started with linux, i know there were plenty of times i mis-typed a command i read online. for me it was helpful to try some commands again just to see where i made the mistake. one comment i read even suggested using copy and paste for the command itself if that proved to be easier. i like typing them out for myself just so my fingers get used to doing so, but everyone has a way that works best for them

i say all of that because i was just able to install zim from a terminal in an ubuntu 18.04 virtual machine with the previously listed commands:
sudo apt update
sudo apt install zim

however, if you don’t want to try installing from the terminal again, i can understand that. Zim is also available to install from Ubuntu Software: 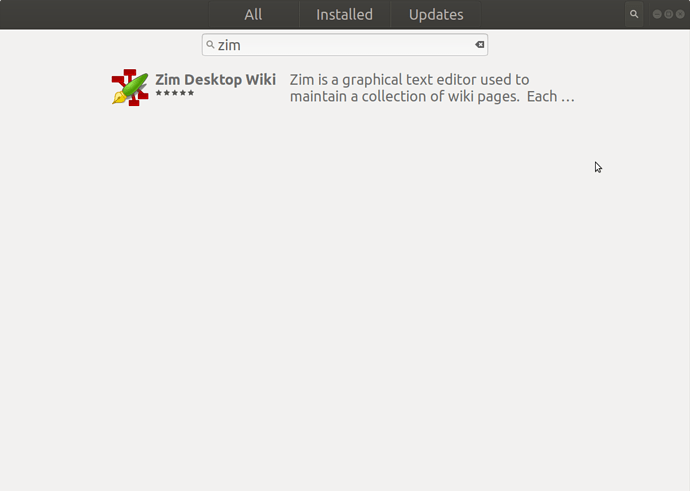 when i opened Ubuntu Software (there is an icon for it on the dock. it looks like an orange briefcase

with the letter A on it. or you can press your windows key and start typing “Ubuntu”. it should appear as a choice with the same icon), i clicked on the magnifying glass in the upper right corner to open a search box at the top. i typed “zim” into that box.

once you have a window that looks like the one above, you should be able to click on the entry for zim. near the top left of the window that opens there should be an install button

before I go back to try again, just in case, is ctrl c correct to copy and ctrl v to paste? It seems like it my old unix where I learned those two, but it has been a few decades ago. I just wanted to make sure…

that should work in the majority of cases. when it does not, i often use the mouse to highlight text and then if i right-click on that text a context menu with an option to copy should appear on the screen. right-clicking on the destination should produce a similar menu with paste as an option.

Thanks for that. I’ll keep that close when I go back in.