Why XFCE is superior to other DE's [ My Opinion ]

Hello!
Just moved from GNOME to XFCE and loved it!

Just stating the points for which I think it’s superior to other DEs:

These are my views on XFCE.
Do Reply with your thoughts!

@TypeHrishi
I have used both XFCE and Mate and KDE and Gnome, using Gentoo
Mate is better than all!!!
I am now running FVWM-Crystal and Mate with Gentoo.

Finally a true review of Xfce! I agree with every word you said.
I have tried most DEs, kept coming back to Xfce, for 4 years now running 3 distros, all with Xfce.
Yes, it took some time to completely customize it, but it was a lot of fun to learn too.
I would add just one thing to your post: The Xfce forum is so wonderful, very friendly and helpful, especially ToZ, he knows everything about Xfce and helps everybody in no time.

I have tried most DEs, kept coming back to Xfce,

Yes me too. Only thing I wish Xfce woild get is redshift.

Only thing I wish Xfce woild get is redshift

I think you can install it. I never used it, I heard it was buggy, but it can be fixed by deleting some files and also adding some new ones into your .config folder.

Yes me too. Only thing I wish Xfce woild get is redshift.

I already use RedShift on XFCE.
Installed it from pacman.
There is no GUI Settings Manager for it but you can always use the ./config/redshift.conf file to edit all the settings!
I have edited the Day-Night Color Temperature, You can use the Auto-Location but I just used the manual one and I have setupped the coordinates[lat-lon] of our locality. You can also turn on transition, which means the Color-Change will happen gradually. I preferably use it as it feels better rather than a sudden change. This is automatic in GNOME as I have used it before!

I like Xfce a lot, it’s simple, light-weighted, stable and does the job. That’s my current first choice for laptops or VMs, usually on top of Manjaro.

I didn’t have the same troubles with Cinnamon, which is my other preferred choice for Manjaro on desktop or mini-PCs. That or KDE for OpenSUSE - I know that theoretically the distro shouldn’t have an impact, by my experience tells otherwise, some DE are easier to integrate or have better settings from the start with some distributions than others, even if the situation is better today than years ago.

For the ease of customization, I found that nothing was as good as KDE. Once you know where to look, though, it doesn’t matter so much.

some DE are easier to integrate or have better settings from the start with some distributions than others,

Yes. That is because of the support software. If you mix GTK with Qt it can work , but there can be some strange interactions.

I already use RedShift on XFCE.
Installed it from pacman.

I must check the Debian and Void repositories. Maybe it is there now.

Yes. That is because of the support software. If you mix GTK with Qt it can work , but there can be some strange interactions.

That, or how properly the DE is integrated, sometimes switching to another DE will leave remnants then crash, or will continue to use bits of another DE. Or maybe some requirement doesn’t make it possible to install a recent version. There can be many different reasons.

sometimes switching to another DE will leave remnants

There is one distro (Fedora) that allows multiple DEs and manages it properly, so that they do not interact, and allows you to switch between them.

XFCE can be customized a LOT!

Yep XFCE all the way for me too. Started my XFCE journey with Peppermint OS 7, 8, 9 and 10. Peppermint was a hybrid of LXDE and XFCE. It zoomed along faster than normal XFCE and because Mark Greaves was the man at the helm, who put it all together single handedly. He was a Linux Encyclopedia, knew everything about it inside out. Mostly memory, but like most of us he took a lot of notes too. When Mark Greaves passed away at the beginning of 2020, I, could not use Peppermint any more, simply because every single piece of Software he’d written into the OS, would just upset me further. So I was torn between grieving for Mark and letting Peppermint OS down, by going onto something else. It was the hardest decision ever for me to do, as I spent time through out my time with Peppermint, getting to know Mark, staying up with him till three or four in the morning answering people’s queries on Peppermint Forums.

Never met him in person, but just by chatting with him got to know him.
I went to Linux Mint XFCE Edition, but waited till April 2020. Found it so hard to let Peppermint go altogether. I then came up with the idea of making my own XFCE theme with Mark’s theme as a template, changed the colours around, to a nice dark grey, window border fades out when not highlighted. I then had to go on the hunt for a Icon theme, something light and fluffy to go with my theme? Sardi-Ghost-Flexible grey is the right Icon theme for my theme aptly named Smooth, as it has no Under-Shoot lines, like the default themes in Mint and a lot of other XFCE OSES do. I get as to why they are there, but in my experience after right clicking panel and the list does not look right, just keep right clicking till it does. Then reboot and you’ll see that it will display correctly all the time, so no need for Under-Shoot lines in themes.

I finally after making my own theme, was able to say goodbye to Peppermint OS, but take a little bit of Mark with me, which helps an awful lot. I moved to Linux Mint Ulyssa based on 20.04.1 the first point release. What I was noticing with it though, was icons being added wrong onto panel, through panel launcher, then all panels would disappear, when deleting apps off of panel. As Linux Mint went on releasing Uma and Una, the panel problems increased. To this day have not found the answer. So now I’m on Xubuntu 20.04, everything I chuck at it, it says yes to. It’s just like using Peppermint all over again, as everything I chucked at Peppermint it just kept saying yes I can do that. Love XFCE, have four panels Panel 0 with Whiskermenu, Panel 1 with time/date, Pulseaudio Plugin, Network Plugin, Panel 2 Docklike Plugin with all my apps on, Firefox, Nemo file manager, Synaptic, WhatsApp, Thunderbird, Kdenlive(AppImage), ClipGrab(AppImage), OBS-Studio, Spotify(Linux Mint’s version), VirtualBox, Xed, Audacity, Celluloid, Inkscape, GIMP and finally XFCE4-Terminal. Opened on a single click. A bit like in Cinnamon or KDE. My final panel, panel 3 has all my web Apps I have setup to open with Firefox. YouTube, Netflix, Disney, BBC i_player, ITV Hub, My4, My5, UKTV-Play, Amazon UK, It’s Foss Community, Gaming On Linux, World Of Solitaire, Proton DB, Jigsaw Planet. All panels are transparent and it’s this way to have my Desktop, that works for me.
Saves keep going into Whiskermenu all the time. Thunar I don’t like, because not enough options. Nemo has everything I need I even made a script for it to read Sha56 from downloaded Linux ISO’s with GTK-Hash, from a right click on said ISO. 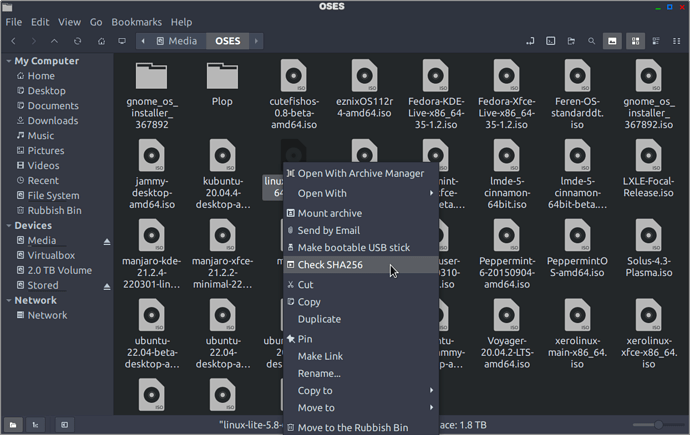 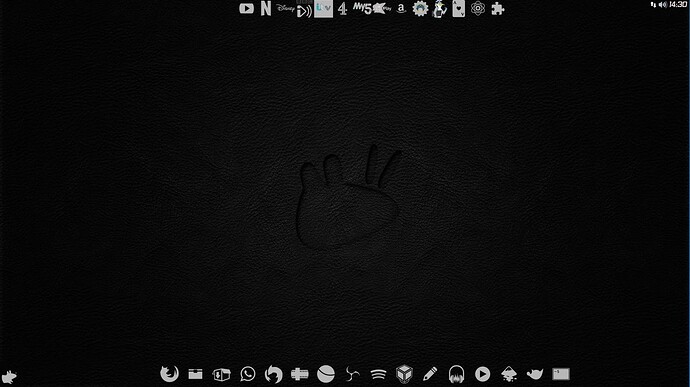 Only thing I wish Xfce woild get is redshift.

You could get Linux Mint’s version?
I’m going to give it a try now here in Xubuntu 20.04
Doesn’t work do not bother.

I must check the Debian and Void repositories. Maybe it is there now.

I think it’s been there on Debian for a long time.
Check this: Installing and configuring redshift in debian gnu/linux - Clinton Pavlovic

You could get Linux Mint’s version?

How do you write your custom word and give it a link?

Will try in Debian.
Still leaves a problem in Void… it does not use .deb files.
Might have a go at unpacking .deb file and hand installing it.

Your Xfce config is very impressive.

Still leaves a problem in Void

The Advent of Void: Day 12: redshift

If you stay up late working on packages and system security patches, you may notice after a while your eyes start to hurt. This is likely due to too much blue light at night, which studies have shown can cause eye strain. While glasses and monitors...

Or this:
https://pkgs.org/download/redshift
(Void is at the bottom of page. You might have to filter out “all distros” or “Void” on top first.

The Advent of Void: Day 12: redshift

Yes, that is simple.
It is GTK so should work with Xfce… Will try.
Thank you.

How do you write your custom word and give it a link?

Click on the chain or keyboard shortcut CTRL+K together.

Must highlight word first that you want to hyperlink.