I got a new Dell laptop with 256GB SSD hard drive having the Windows 10 OS and it also has another 1 TB SATA hard drive.

So, I tried to install ubuntu in the 1 TB hard drive. (following the article : https://itsfoss.com/install-ubuntu-1404-dual-boot-mode-windows-8-81-uefi/)

While installing it, I got the error that “No EFI Partition was found” after I created the partitions for root /, Home and Swap Area.

After searching the Ubuntu help pages, I created another partition for EFI with 250MB size as suggested in that. And the installation was completed successfully.

But when the system was restarted, it was booting by default to the Ubuntu system and there was no sign of Grub loader with the dual boot options. So, I went to the BIOS menu, where I could see the UEFI Boot Options under which there was 1. Ubuntu and 2. Windows Boot Manager options.

When I chose the Windows Boot Manager, Windows was loading well without any problem.

Then upon restarting the computer, it was again booting to Ubuntu by default again. So, I tried to fix the boot options using the boot repair menu as given in the Ubuntu help documentation and community. But unfortunately, it didn’t work either.

As given in https://itsfoss.com/install-ubuntu-1404-dual-boot-mode-windows-8-81-uefi/, I tried the below command in the Windows CMD prompt.:

After that, the windows didn’t boot at all and was getting an error that no bootable device found.

Now, I have used the windows Install media and reinstalled the Windows freshly and Ubuntu got removed as well.

Could you please suggest, where I went wrong and how I can fix this?
How can I install ubuntu again, should it be installed in the same SSD drive that has the Windows OS instead of the other SATA HDD ? Please help. Thanks!

As given in https://itsfoss.com/install-ubuntu-1404-dual-boot-mode-windows-8-81-uefi/ , I tried the below command in the Windows CMD prompt.:

After that, the windows didn’t boot at all and was getting an error that no bootable device found.

You should not have done that in the first place. You tried to apply a fix for another problem

Somehow the Ubuntu doesn’t see the Windows install. This means something is missing in the EFI settings or perhaps you created two EFI partitions on both disks.

Can you please share a screenshot of your disk partitions, for both disks?

You truly raped your PC. You created a great mess. Well, at least you don’t mind both storage media being deleted, as it seems.

Welcome to our community. Before you post a question or request help, please read this FAQ in case your question is already answered. If it is not, use the template for opening a request for help, so you can be helped quicker and more efficiently, which is probably one of your primary goals when addressing your issue, as well.

If you install to 2 different storage mediums, then remember to install only a SINGLE GRUB! Don’t install GRUB on both storage mediums. Then it will work.
Additionally, follow each single step of the tutorial you choose. Don’t skip steps. Don’t add steps. Just follow the tutorial step by step. Precisely.

If you do this, then everything will be alright.
Before doing that I would recommend wiping your storage media (as it seems like you don’t need the data on them) and then start anew, using a dual-boot tutorial, from scratch. This includes entirely reformatting both storage media (i.e. deleting all data from them).

Thanks Abhishek for your response. I have attached the partition disk screenshot as requested.
Apart from the partitions suggested in the tutorial, you can see I have created a 500 MB partition for the EFI as I got the error when I tried to move to the next step.
As mentioned, the partition is not showing the other storage disk of 256 GB which has the Windows OS.
So, I could not create any partition in the other disk. Please suggest if I need to create a partition in the Windows disk and try to install Ubuntu there?
Thanks again! 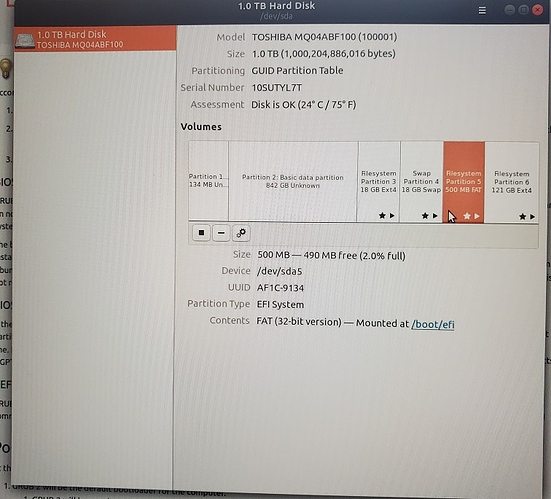 ! I will definitely check it and try to reinstall the ubuntu.
As its a brand new PC, both the storage media was clean. So, I didn’t mind cleaning it up and bring it back to the factory settings.
I contacted the Dell customer support and they helped me to reinstall the Windows back. And they also told Dell system does not support dual boot with Ubuntu.
As mentioned in my post, one of the storage disk is 256 GB hosting the Windows OS and the other is a clean 1TB disk. I tried to free 200 GB in it and installed ubuntu in it.
So, ubuntu was not detecting or seeing the Windows. How can I install the GRUB alone in the disk having Windows when its not detecting the disk?

How can I install the GRUB alone in the disk having Windows when its not detecting the disk?

What exactly do you mean? Please elaborate.

I meant the Windows boot manager is in another disk, should I install GRUB in that disk having Windows? Even though ubuntu is installed in a separate disk?
In partition process, it was not detecting the Windows OS drive.

Having two separate media for two different operating systems is the best situation one could have.

Then the GRUB bootloader would only be installed on Disk 2. If you do it like that, everything will work flawlessly.

This what I did in the first place following the same tutorial link you provided.
But unfortunately GRUB didn’t get installed. and ubuntu was booting by default.
Each time I had to go to the BIOS Menu and choose the Windows from there!
That is when I screwed up things!!

I’m waiting for the LTS release on 23rd. And I’m planning to install that.
Will come back to this thread if there is any issues.

I downloaded the latest Ubuntu LTS just released today and tried the installation.
But the dialog after the Keyboard setting said “Turn Off RST” with the message "This computer uses Intel RST( Rapid Storage Technology). You need to turn off RST before installing Ubuntu. For instructions, open this page: help.ubuntu.com/rst

This looks to be a risky process to keep the Windows safe!

Try disabling it in the UEFI. If Windows does not boot after that, revert the change and follow the tutorial you linked step by step.

Yes, I tried that. Windows is not booting and going into System Recovery when I do some changes to the BIOS Setup like disabling the Secure Boot or changing the Controller setting to AHCI from RST /RAID as given in that tutorial.

Probably as the Dell customer care agent has mentioned, it might be not possible to install Ubuntu in this system.

Probably as the Dell customer care agent has mentioned, it might be not possible to install Ubuntu in this system.

You can put Linux on it. It’s just not that easy as usual. Don’t let anyone tell you that a normal consumer machine is “not compatible” with Linux. That is absurd. Linux is around since pretty much 30 years.

True , even I have been a user of Linux for more than 15 years now, right from the cd versions we used to get along with digit Magazine, beginning with Fedora and then Ubuntu later on.
I had installed in many brands like HP, Toshiba and Lenovo. HP gave similar pain and had to finally install Linux mint which boots for within windows.

Also, I had similar issues, when UEFI was newly introduced along with Windows 8. And I cracked to install Mint alongside Windows 8. Shared my experience here:
https://forums.linuxmint.com/viewtopic.php?f=42&t=121912

But this looks to be pretty new. I’m checking on the below 2 articles which gives me some hope:

I decided to live without the GRUB and went ahead with my initial approach.

And as 20.04 was not allowing to install due to the Inter RST issue. I first installed 18.04 and I upgraded to 20.04.
Only thing is on restarting , you will not be getting the GRUB but instead Ubuntu will boot by default. If you need to boot Windows, you will have to go to the BIOS and choose from the UEFI boot options each time.

You can change the boot sequence in the BIOS settings for which you want to load by default.

The title of this thread can be changed to “Workaround to install 20.04 with INTEL RST systems” .

After upgrading I installed the KDE desktop .
And at the login screen I chose the “Ubuntu on Wayland” option.

After doing these 2 things, I lost the new features of 20.04 like the Ubuntu boot screen with Dell logo and the power off/ log out blur effect screen.
Not sure how to get that back.