At the risk of detonating a forever thread, is it at all feasible to settle on one distro to become the defacto Linux desktop? I’ve seen postings that blame the inability of Linux to sweep the world and become the dominant desktop on the continual inter-distro bickering. Yes, freedom of choice is the named advantage of Linux, but maintaining choice for its own sake seems secondary to ease of use and compatibility. It’s hard to displace a cannon like Windows with a hundred or a thousand tiny popguns.

My readings of the threads on this topic reveal that some distro in the Debian extended family would be the most logical, most easily implemented Universal Linux–Mint surfaces most in these threads. The computing world seems loaded with XP/Win7/Win10 users who are ripe to change, but the path is too muddled and off-putting. The Year of Linux might be achievable if we all can settle on one entry path for all newcomers.

After all, 95% of the users in the world need email, facebook, amazon, and streaming, and very little more. Chromebooks generally satisfy that giant slice of the market. The participants of this forum, being more knowledgeable, can’t agree on much, but a utility distro, usable on any machine made in this century, could challenge Chromebooks, Apple, and Windows pretty easily if it were marketed.
A

Essentially you answered your own inquiry, and there-in lays the rub. Choice and the perception that OS A is better than OS B, and Desktop A is better suited than Desktop H. Because…

Then there is the contentious issue of Free or Non Free and Proprietary software, would such a shift, encourage the likes of Intel etc to reveal their patented designs to Linux developers.

Ubuntu may have come closet, with the fabled year of Lin…ux…!

You’re too sharp. I thought it might take a couple of hours for someone to see the tautology. While I’m committed to Linux for my own use, its very nature and the nature of its users makes universality impossible. As a side note, my son works IT for the local school district and they have been dumping Apple like bad fruit and stocking the schools, from kindergarten up, with Chromebooks. This might be the universal OS of the future.

Google and Apple both understand you need to control Hardware as well as software for you OS to excell so there is no difference in compatibility. Linux will always be fragmented and I’m not against that, Because not just Choice but. Differnces in philosophies of what and OS should be and do. If you look at the commercial end of things Redhat (now IBM), OpenSuse and Ubuntu are the top dogs. Debian on Servers. But others may and do have other opinions. I long ago stopped worrying about Linux overtaking MS or Mac for that matter. It will happen of it own accord or it won’t.

I like what kc1di said that to be universal, you have to control the hardware and OS. Chromebooks are doing that now. Windies accomplished this with market share and having everything automatic so the user doesn’t have much of a learning curve, I think the learning curve for Linux is steep, but I have seen Zorin OS designed for the Linux Newbie. You can customize it as easy as you can Windies, but it is Linux

This might be the universal OS of the future.

Watching the shopping habits of the younger generation, the desktop will probably go the same way as the Dodo, it seems a powerful mobile phone, backed up to their Tablet, is what they want.

My only hope and ambition for Linux on the Desktop, is for it to achieve equal market saturation as Mac OS X… and I really don’t care about fragmentation, different distros…

I’d kinda prefer it to stay “niche”… from time to time I’m disappointed when a game I like the sound of isn’t getting a Linux port - but there’s already plenty of native games for Linux… I’ve got so many in my Steam Library, I couldn’t possibly play them all!

Surely the point of Linux is not one size fits all? It was achieved then would we really be happy and would it become just another monster like Windows has become.

The fact that we are here shows that we really don’t want this and if that day did happen, then perhaps we would all move on.

It’s a bit like going for a new shirt and being told you can have any colour you want as long as it is white.

No not for me and perhaps the reason why we don’t have one now is because we really don’t want one.

Ironically, this was our topic of the regular meeting in february of our communities.
“GNU/Linux on every desk. - Do we really want that?”

Abstract of one sheet…

I also used some memes to get my point across… 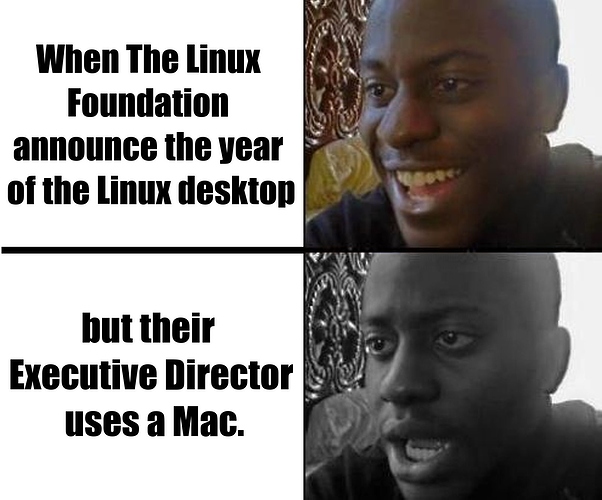 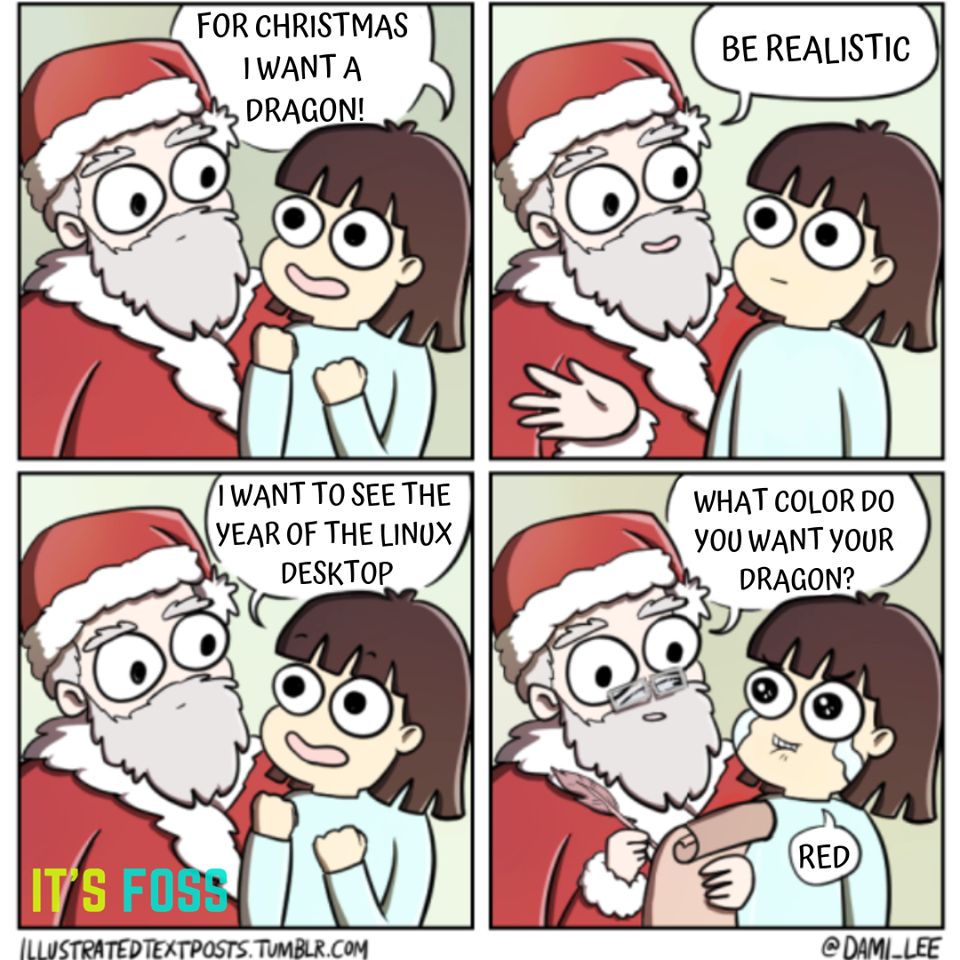 No. I haven’t looked at numbers recently but the number of distros will probably continue to grow! I would be shocked if if, say, Arch or Debian suddenly disappeared: each distro is, in a very real sense, an experiment. Experiments which aren’t completed yet and of which we are all voluntary participants.

And yes I can totally see how scary Linux can seem to a Windows user–remember every Linux user migrated. I think a big part of that fear is that Windows is fragile and expensive to fix. Which can make its users cautious. Probably too cautious.

Most Linux distros are far more stable–so far less likely to borc–but are nevertheless free to re-install if they ever actually do. So fixing a broken system is trivial compared with Windows. And having installed both in the last calendar year I can tell you that any Linux is miles easier than Windows 10. Not to mention much faster.

I’ve replaced Windows with Linux on many people’s systems and you’re bang on: all that most people want is a stable system that runs the apps they want to run: Mozilla, Thunderbird, Netflix etc. Most can figure out a different OS pretty quickly. Consider: many people email from their PC and from their smartphone.

I also agree that Windows should start to bleed users once 7 is retired and once 10 starts charging for updates. But most will get Chromebooks. Anyway, that’s what happened after the forced 10 download.

I don’t know what the future of the Linux desktop is. I don’t know if desktops have a future. What I can say is I’ve never had as a long a stretch of problem-free computing in my life as I have since installing Linux Mint Cinnamon a couple of years ago.

Exactly. As long as most people use Window, who’s going to bother writing viruses for Linux?

Stop piling on, guys. I understand and appreciate where you’re coming from. Some people will never learn, some people will continue to suffer, and some more people will throw their hands up and buy Chromebooks or try to struggle along with phones, paying tons of money for data streaming.

A few people will wonder what else is possible, and maybe we can sell them on Linux. The best, widest desktop Linux will likely continue to be the Chromebook, but we won’t tell them it’s really Linux. Who will the Windows fanboys hector when we stop rising to the bait?

Yep…
We got carried away again, aren’t we?

927 distros in the Distrowatch data base, if my maths is correct, but this just the ones they have so could be more. Also saw that the number is declining, so the truth is no-one really knows

I thought it was around 300, but it turns out 300 is all Distrowatch bothers ranking! 927… When I did my first Linux install I think there were about 10.

Think of it as living in a somewhat shabby neighbourhood. It may not advance your prestige but niether will it attract thieves.

I certainly hope desktops have a future as that is all I use. I do not have, want or need a smart phone (mainly because I do not want anyone to phone me when I am out and about) and I hate using lap tops. I would go blind trying to read lengthy text files on a phone anyway. I do not stream music as I prefer to simply buy the CD and I never play games on a computer as they do not interest me at all. My favourite desktop was Unity but since its sad demise I currently use Linux Mint 19 cinnamon after trailing several different desktops. I did also like Ubuntu Budgie but I am waiting to see if their next release has a QT desktop that i am anxious to try.

The death of the desk top has long been predicted, since the growth first of the laptop and then the tablet, but it is still here and selling. True not as many as in the past and will perhaps continue to decline. However if you look at the trends for other things they are also showing a slow down or decline. It’s the same as what happened with Vinyl records and look what has happened there.